So it begins here like i have told in the preface page i finally decided to buy a kit. Having decided that i began searching to find an Indian seller who sells the kit, Indian because i was afraid of any customs tax if i order it from ebay.com or aliexpress.com. After lot of searching i finally found a seller who sells the kit for INR 25k but was it a mistake? You tell me :)

After writing this blog many people pinged me in Facebook and asked me to reveal the name of the seller. So far i thought, what is done is done, why should i go behind them? But then i saw a post on one of the 3D printing group in Facebook where someone is trashing the seller for posting an advertisement. To my surprise the guy pointed out my blog and kept on accusing the seller for bad stuff and fraud. Somehow my name got dragged into all that, then seller addressed a post to me claiming that he did the right thing. I am pretty upset with his mindset and i think its time for me to reveal the name of the seller. So the website i bought the kit is roborium.com and they actually sourced it from a company called rapid innovation http://www.rapid-innovation.com/. I still don't want to reveal the names of people i interacted with as they still are my friends in Facebook.

Again i would have kept quiet if the seller actually accepted the parts were crap and may be took some courage to agree their mistake. I don't want anything from them, but instead they tried to justify their misdeeds with more rubbish. I think its time for me to tell this to the world.

So without thinking much i made the order, though the vendor web site was pretty new to me, i somehow trusted them. May be its because i found a guy who runs the site on Facebook, so i was relived and i knew it will be OK. After i made the order, few days later they messaged me and told it may take a while because they got lot of orders. If memory serves me right this happened somewhere around October 2014. This delay lasted for one or two weeks and they finally shipped it. Nightmare! they shipped it through DTDC couriers and that too it was a land shipment, meaning it will be delayed further. To add to further disappointment, DTDC shipped it to wrong location first and it went back and all sorts of delay happened. I did contact DTDC and they couldn't do anything about it. I did contact the vendor guy on Facebook and he too complained to DTDC but nothing much; the delay just didn't go away. Bad Timing, I got frustrated, you don't know the frustration that a kid has when he waits for his new toy :-)

So after lots and lots of waiting finally it arrived!!!! To my horror the package was tore open. see for yourself. 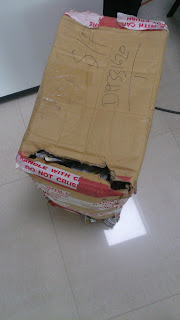 Luckily nothing was lost from the pack, but everything was mixed up and out of place. No major damages.... Thanks God!!!

Well most of the stuff from the kit were in good condition. For example the electronics, Frame and threaded screws etc

The Frame and other hardware like threaded rods and smooth rods, bearings were all kinda good stuff. There were some minor issues though; like the m5 threaded rods had their ends cut in such a way that its hard to put in nut on it. And some bearings in the pack were not so smooth too. They seemed like cheap ones made in house.

There are many things in the kit which were not exactly like what i had in mind about
my first 3d printer. For example see the hot end

So these things needed an upgrade and looks like i wasted money :(

Now comes the worst stuff from the kit i got.. The printed parts!!! they were ridiculous and not usable at all. see for yourself

Now its obvious that i need to get new replacements for these items. So clearly buying the kit was a wrong choice that i made.

You can read more about the replacements i bought for these parts in the next post.